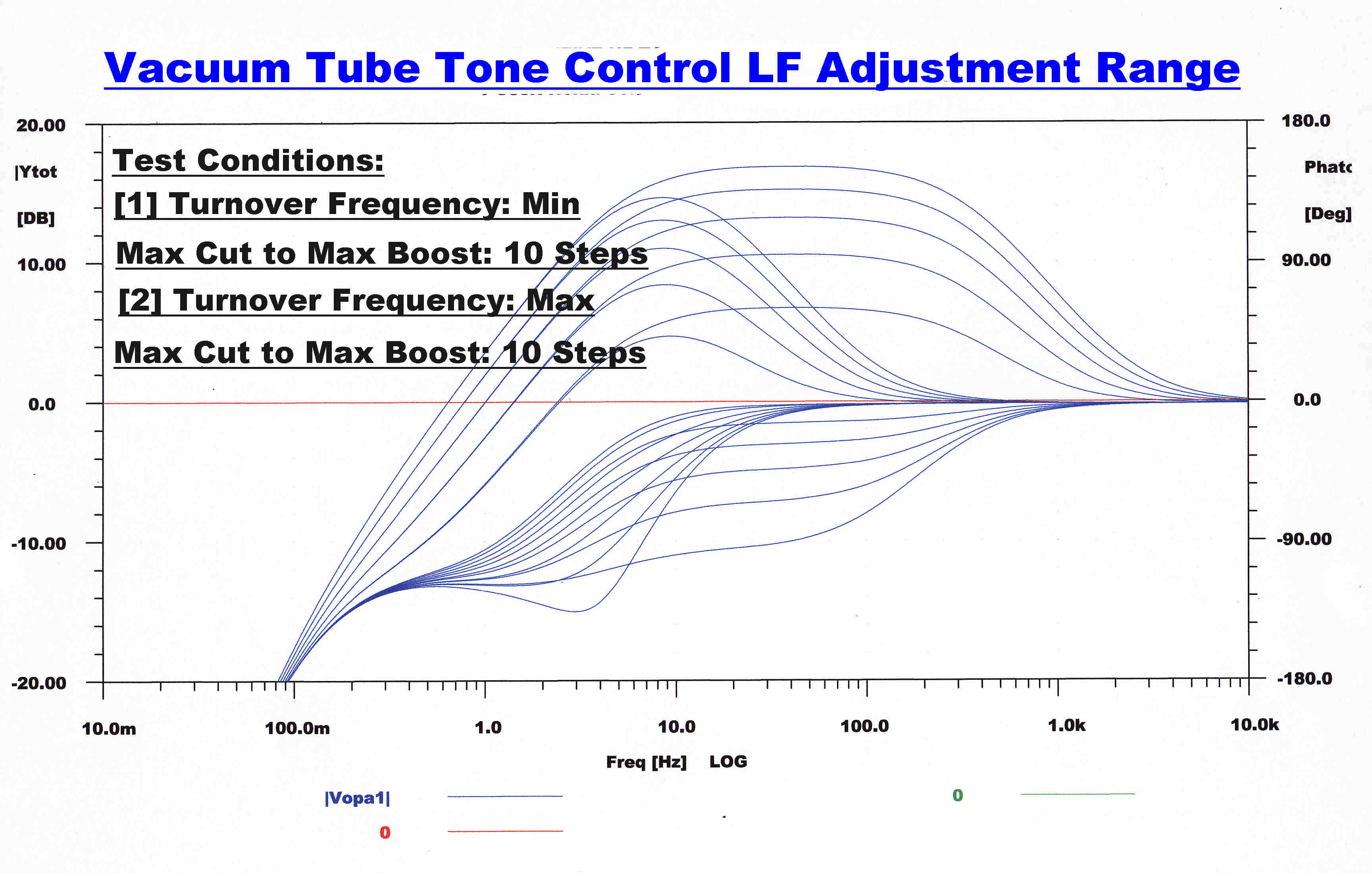 Performance in The Flat Position

This section describes the design and performance of a universal tone control.
Often it is desirable to modify the response to program material, especially material from old sources.
The tone control can provide either a boost or cut independently at high and low frequencies.
The onset frequency of the bass or treble boost or cut can also be independently controlled.

The complete circuit of the disc tone control is shown below:

The input amplifier consists of VT1 and VT2 and is represented in the simplified circuit as an operational amplifier.
The high degree of feedback forms a virtual earth on the grid of VT1.
This prevents interaction and coupling between the four inputs.
The overall gain is very nearly unity and the low output impedance provides a convenient drive to the tone control.
The 6AU6 - 12AT7 amplifier configuration is used throughout the tone control.
It has an overall gain of 218.
Its design and details are given in the preamplifier- equaliser section. 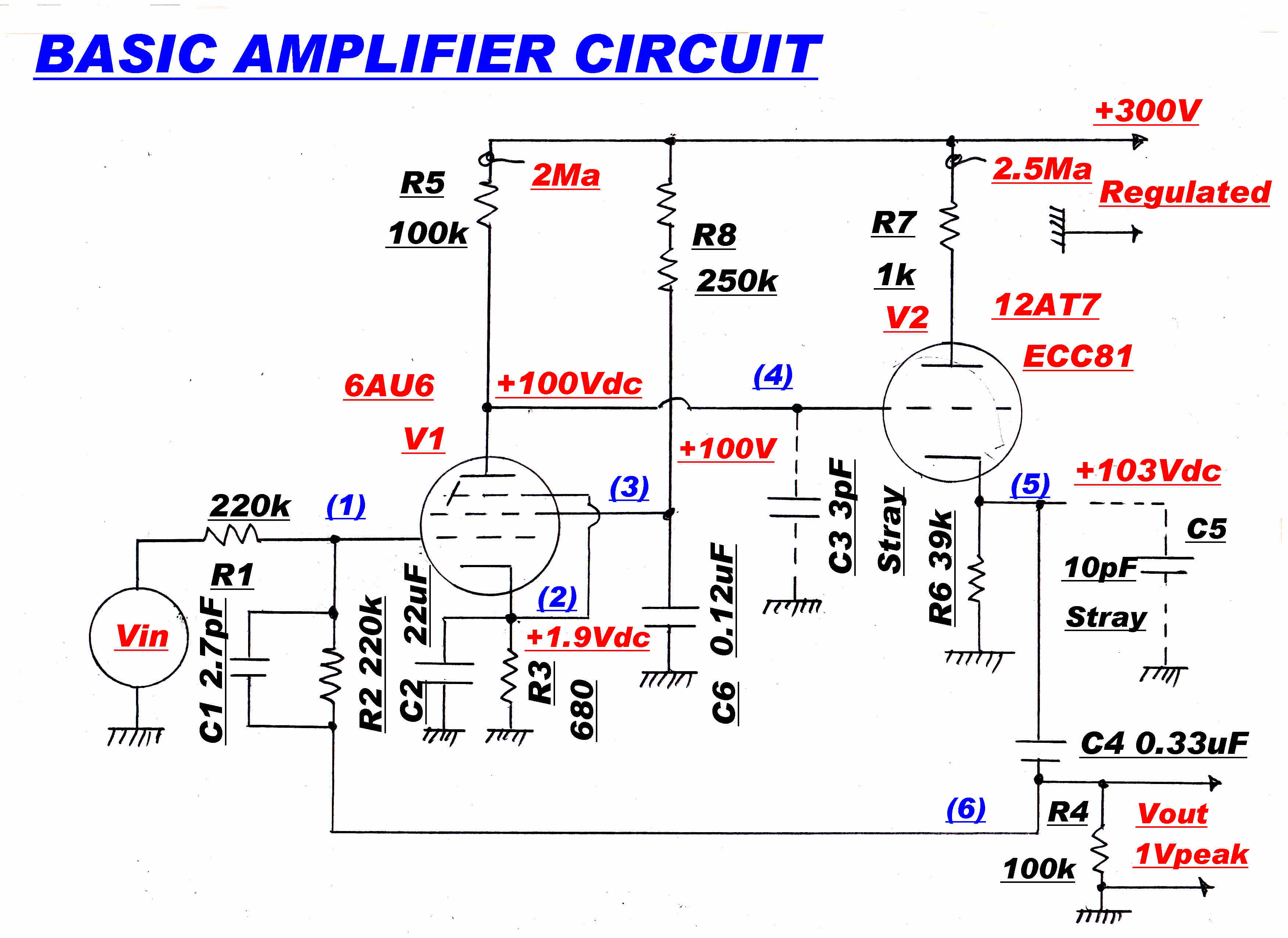 VT3, the 39k cathode load, the 4.333k plate load and the two 100k potentiometers form a bridge which is balanced when the potentiometers are centered.
Note: When 100k Log potentiometers are centered, the resistance of the two sections is 10K and 90k.
This means that there will be no output from a centered potentiometer if the ratio of cathode to plate voltage is 9:1.
At audio frequencies the same current flows in the cathode and plate circuit, so the total resistance in these circuits must have a ratio of 9:1.
Imagine the potentiometers centered with no voltage appearing on their outputs.
The potentiometers present a load of 90k/2 = 45k to the cathode. The total cathode resistance is 39K//45K = 20.893k
The total plate load must be 20.893k/9 = 2.321k
The load presented to the plate by the potentiometers is 10k/2 = 5k
The plate load must now be 4.333k since 4.333k//5k = 2.321k.
The 4.333k load is best made up of a 3.9k resistor in series with a 1k linear trim pot.
High Frequency Balance
It is important that the bridge remain balanced well above 20kHz.
The leads from the cathode of VT3 to the potentiometers mounted on the front panel will have considerable capacity to earth. This is shown on the simplified circuit as Cs.
A capacity Cs/9 must be added to the plate circuit to restore balance.

The single order R-C low pass network between VT4 and VT5 has a variable turnover frequency from 15.2Hz to 339Hz.

The single order R-C high pass network between VT6 and VT7 has a variable turnover frequency from 977Hz to 59.3KHz.

The two 33k resistors added to the front of the mixing amplifier reduce the gain around the feedback loop.
The open loop amplifier gain must be increased to compensate for this.
The gain is increased by bootstrapping the load on VT8 through the cathode follower VT10.
This increases the load resistor, and hence the gain of VT8, by a factor greater than 20.

The line drive amplifier is designed to drive 10 metres of unterminated 75 ohm coax cable.
The capacity of the cable is about 616pF and its reactance at 20KHz is 12.92k.
With a peak output of 1 volt the current drive required is 77.4uA
This is easily provided by the cathode follower VT12, which has a standing current of 2.5Ma.
Because of the heavy feedback, the output impedance looking back into the cathode follower is close to zero. The output impedance seen by the cable is therefore 75 ohms resistive.
This terminates any reflected signal. 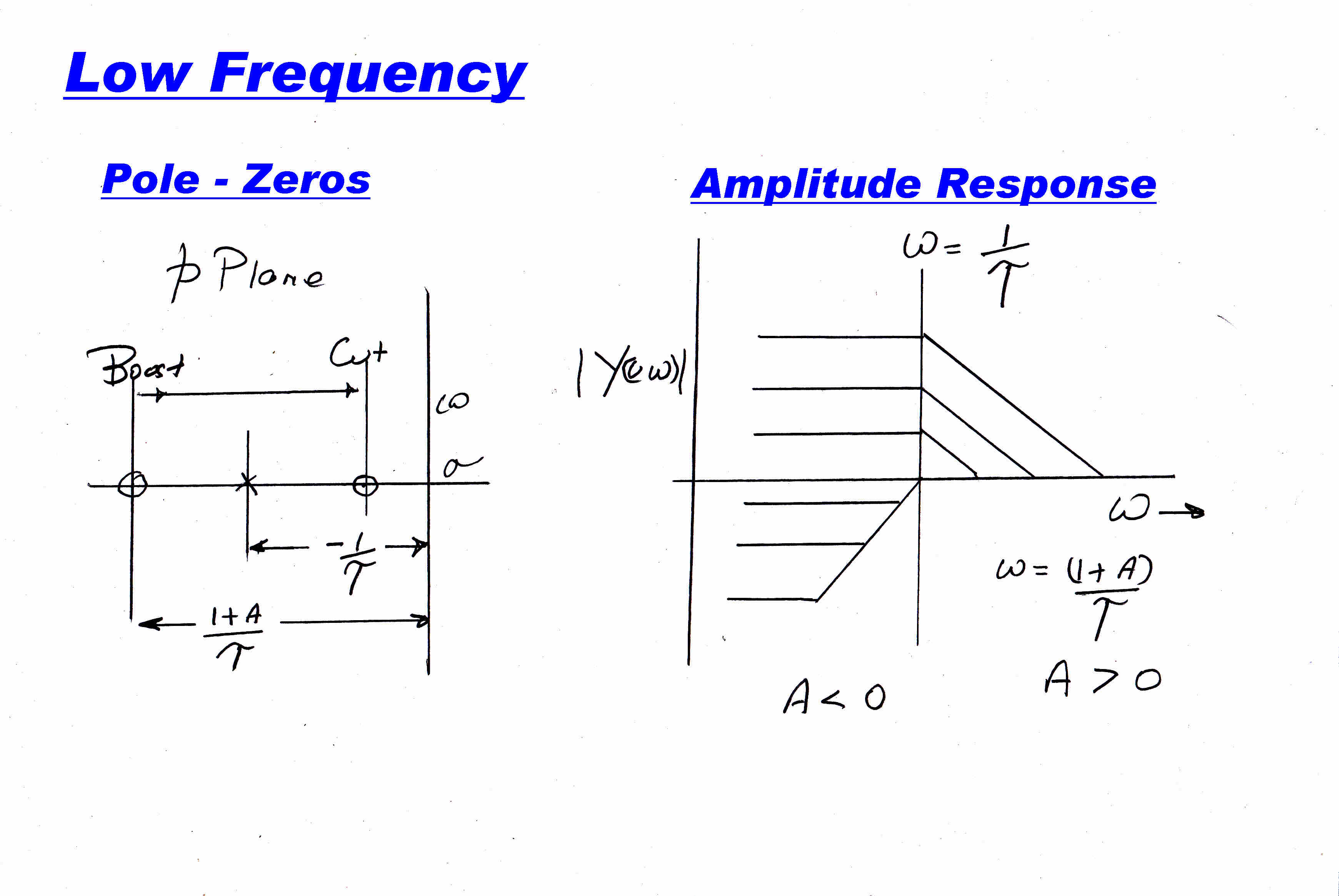 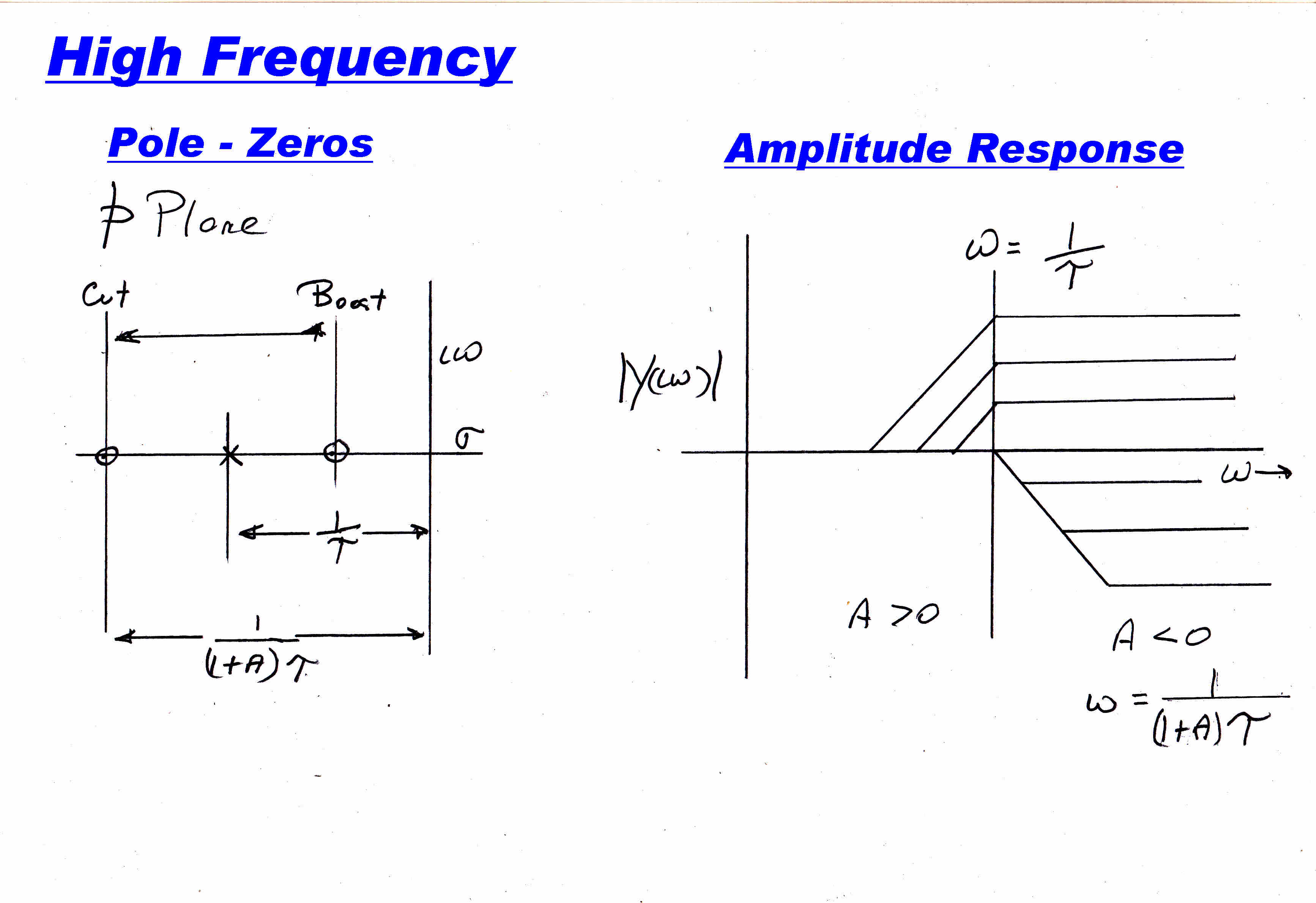 Response in The Flat Position

The response to the signal as it passes through the three stages of the tone control ( in the "flat" position ) is shown below.

A short description of a preamplifier - disc equaliser and tone control from 1955 follows.
The CE and MBH pickups described in the preamplifier section were used and provided a much higher output than modern moving magnet stereo cartridges.
The equipment is still in use. The electrolytic capacitors have been replaced : the tubes are original. 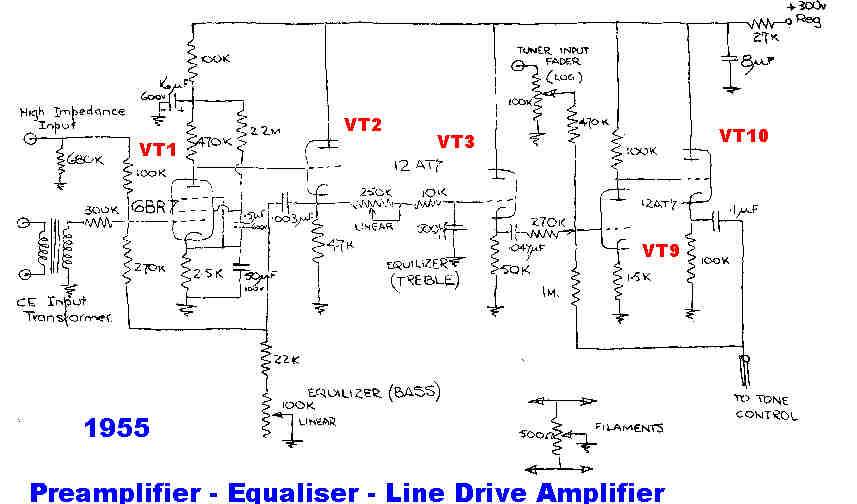 The preamplifier consists of VT1 and VT2.
Bass boost equalisation is achieved with the 3nF AC coupling network in the feedback loop.
The lower turnover frequency is 260 Hz.: the upper 630Hz.
High frequency equalisation is achieved with the R-C network between VT2 and VT3.
The turnover range is from 1137Hz. to 31.8KHz.
For discs requiring no preemphasis correction the turnover is set to 31.8KHz.
The line output amplifier is on the same chassis as the preamplifier but is deiven by the tone control, not the preamplifier. 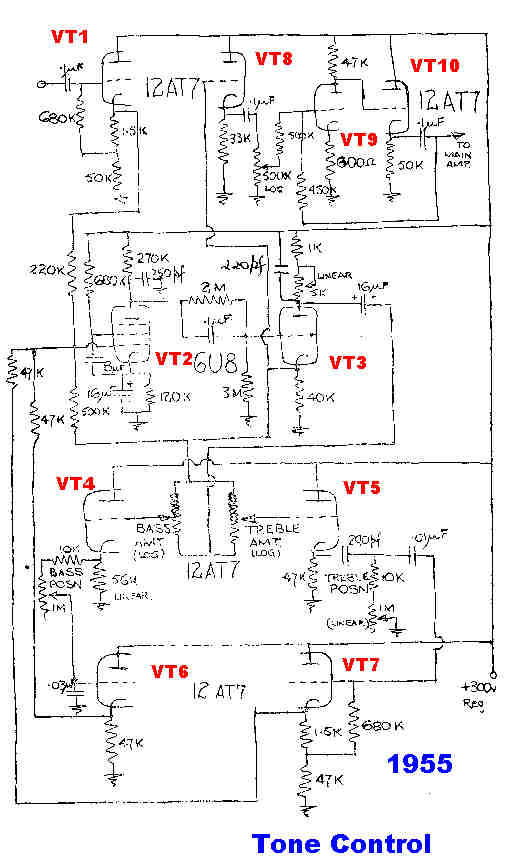 VT1 is a unity gain cathode follower.
VT2 and VT3 form a high gain feedback amplifier.
Variation in response is obtained by varying the amount of feedback around this amplifier through two R-C low pass and high pass networks.
Cut is achieved by increasing the feedback : boost by applying positive feedback to cancel out some of the existing negative feedback.
The phase splitter and 100k Log potentiometers produce a signal beteeen x1 and x(-1/9) of the feedback amplifier output as outlined in the main text above.
VT4,VT5,VT6 and VT7 form unity gain buffers for the R-C networks.
Note: The preamplifier and tone control have been in constant use since 1955.
The electrolytic capacitors have been changed - but all the tubes are original.